Home > About Us > History > Through the Years

Washington Hebrew was established in 1852 when the streets of D.C. were unpaved, and the Capitol building was only half-finished.

From our earliest beginnings, we have been a spiritual, educational, and cultural home for Reform Jews in the Washington, D.C. area. 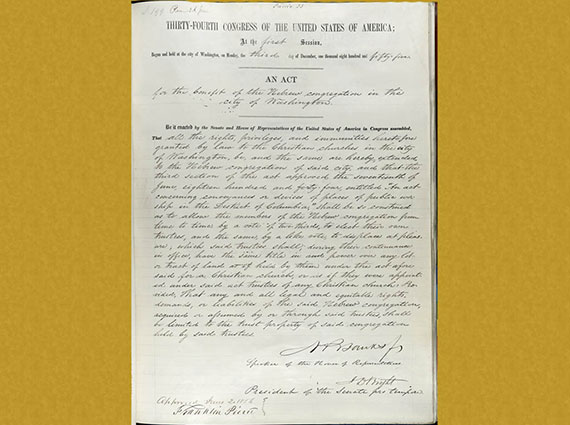 The first synagogue in the nation’s capital was founded in 1852 in a home on Pennsylvania Avenue by 21 German Jewish immigrants. At the time, D.C.’s laws had no provisions that protected the rights of Jewish religious organizations to hold property. Fearful that this right could be denied at some point, our founders petitioned Congress.

On June 2, 1856, it was official. President Franklin Pierce signed into law “An Act for the Benefit of the Hebrew Congregation in the City of Washington.” Serving as the charter for Washington Hebrew Congregation, the act conferred all the “rights, privileges, and immunities heretofore granted by law to the Christian churches…to the Hebrew congregation of said city.” In 1863, after renting space for nearly a decade, we purchased and converted a church at 8th and I Streets NW, which became Washington Hebrew’s first permanent home. The site was near the city’s emerging retail center, where many of our members lived and worked.

Initially, men and women sat separately, with women in the gallery and men on the main floor. Progressive values permeated our culture even then, and traditional practices soon gave way to religious reforms, including the use of German and English during services.

When organ music was added to our worship services in 1869, some members left to form an Orthodox congregation. WHC continued to thrive, however, and by 1897, we built a larger temple on the same site to serve the needs of our growing community. President William McKinley laid the cornerstone, and more than 3,000 people lined the streets to witness the event.

By the 1930s and ’40s, many members had established themselves financially and professionally. They began leaving downtown for new, more spacious neighborhoods. It was not until 1952 that a site was chosen for our present building on Macomb Street. The cornerstone was laid by President Harry S. Truman, and President Dwight D. Eisenhower dedicated Washington Hebrew’s new home in 1955.

Today, with more than 2,200 members, Washington Hebrew Congregation is the area’s largest Jewish congregation and among the largest Reform congregations in the world. Expanding to the Suburbs

In the late 1970s, we built the Julia Bindeman Suburban Center in Potomac, Maryland, to meet the needs of our growing community.

Dedicated in 1978 and expanded in 2002, this beautiful campus allows us to offer convenient options for preschool, youth, and adult education, social activities, tikkun olam projects, and monthly musical and Tot Shabbat services. The building’s social halls and reception areas may be rented for meetings, activities, and celebrations.